In 1989, a year before the fall of the Berlin Wall, we were already feeling, from the cinema of the Eastern bloc, that things were oscillating quite a bit; the need to move forward was urgent. It was urgent to arrive in Zerograd, and observe the protagonist, seemingly straight out of the graphic novels of Tintin in Syldavia with his thick mustache and laid-back disposition. We take a dive in a world completely out of control and totally absurd, as proposed by Russian filmmaker Karen Shakhnazarov.

Arrived for a gritty mission, a story of an engine and spare parts to change for a nondescript machine, the hero, who we cannot say has any real professional drive, discovers a washed up world where anything goes. Zerograd is not just a film, it's a new "way of life," populated with very strange happenings. A secretary works entirely in the nude, as if it's the most natural thing in the world. A cake modeled on the protagonist's head is served...  to him. He is forced to eat it, giving him the impression of a strange cannibalistic malaise because, generally speaking, one does not devoir one's own face.
Inheriting a world based on community, where every (Soviet) action necessarily has consequences, Zerograd, an excellent black comedy, demonstrates that community can train you to accept zaniness with a soft politeness, hardly a surprised look, and of course, nary a protest. In this little world cracking everywhere, the viewer must let things pass and follow all the characters with enthusiasm, including a line from the film that sums up their relaxed state of mind: "We heard singing, so we came!" 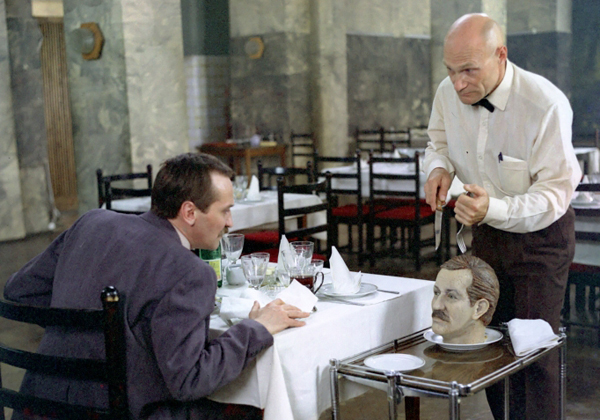