Raised on cartoons, Walter Hill delivered a solid master class of over an hour, hosted by the astute Yves Bongarçon. The filmmaker tried to make us believe that his success in Hollywood was due to his charming smile. The conversation that followed at the Comedy Odeon Lyon proved it was much more than that. Highlights: 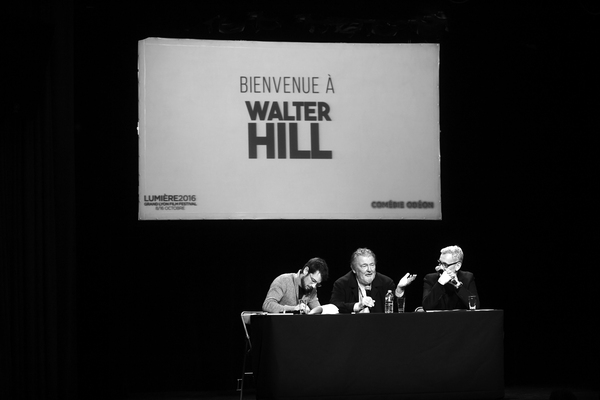 "No filmmaker is modest, we are all the epitome of ego."

"It took me four or five years to successfully write a script properly, and from that point on to make a good living."

"I'm not a good producer [Walter Hill, producer of the Alien series (!!!)] I hate calling. My job as a producer is to oversee the scripts."

"My brother and I went to see all the new movies at the theater. I loved everything, with a preference for westerns, but I really love all styles of cinema - except children's movies. I never could tolerate them. I don't know why."

"It was difficult to talk to Sam Peckinpah, for whom I wrote the script for The Getaway (1972). Peckinpah was very intelligent. He played the ignorant cowboy but in fact, he was very knowledgeable about the history of cinema. He was an alcoholic, that's an open secret. There are alcoholics in my own family, so I know the problem well. It is very difficult to work with alcoholics- you have to slalom between the drunken moments and the hangover moments. One morning, Peckinpah was furious. Newsweek newspaper had accused him of stealing his ideas from Arthur Penn, whom he didn't like at all. I told him that it didn't matter because Penn had stolen his idea from Akira Kurosawa! My argument didn't work, and Sam gave me hell! Fortunately, he was a very funny guy, very ironic. He liked not making life easy on others!"

"When I realized for the first time - I didn't have the skills but I had at least been around the block. The central question for a filmmaker is to find his personality. And at the start, you're really all alone and all naked!"

"Nick Nolte didn't want to be in 48 Hrs. (1982).'I can't play a cop! I'm not a cop!' he'd grumble constantly. Then there was Eddie Murphy, who had just come from the New York stand-up comedy scene, and who dreamed of making a film, any film When I offered him the role, he said: 'Okay, on the condition that I don't wear a prison uniform, but a sharp suit!' Every day on set, Nolte would arrive, saying, 'Good Lord, Walter This scene isn't working!' I knew it was working, and we just rehearsed over and over again. The difficulty lay in the fact that Nolte was an actor and Murphy wasn't. He was a natural, but he didn't know how to act yet. He was just starting out. I had to adapt to the situation like one does when directing children. I told Nolte, 'We'll choose the takes where Eddy is good,' which made him complain even louder, but Nolte was passionate about his work, which made it exciting, and he found an excellent way to share with Murphy, which was great."