Keep your eyes on the road

"I'm ready to die ... but I don't want no trouble." With these words that fall like a prison verdict, Mark leaves a student assembly preaching the revolution, and is immediately accused of "bourgeois individualism." If there's nothing bourgeois about him, this handsome, brown-eyed man of few words will reveal himself to be pretty damn lonely; but not without humor: "What's your name?" "Karl Marx," he answers to a cop when asked to identify himself. We are in Los Angeles in the late sixties, in a country with tension boiling over, like a pressure cooker about to implode. Everyone seems to want to do battle in this America, torn by the Vietnam war, with the scars of an unresolved apartheid still raw. 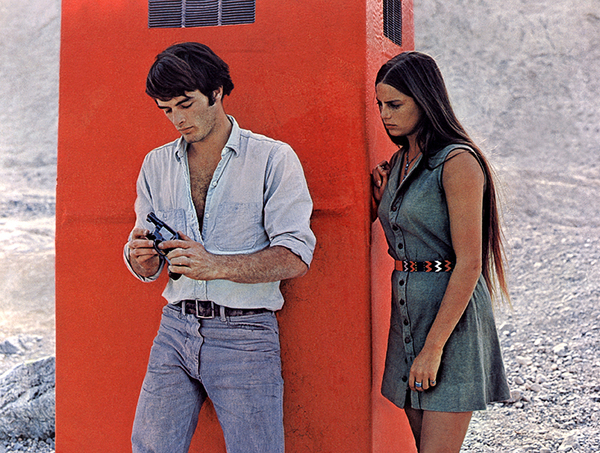 Present during the murder of a black student by the police and afraid of being wrongly accused, the young man gives up playing the sheriff aboard his faded pickup truck and lands on the tarmac at Santa Monica Airport. There he "borrows" a small plane and choses to escape to the desert on the outskirts of Nevada. Then film itself takes off in an about-face, leaving the political and social commentary register, in favor of a long poem cherishing the utopias of its time. The famous "Make love not war" therefore serves as mantra to the second part of the film, which sees our hero madly pilot his airplane, like a big drunken bumblebee, with a tank-like interior… on the wheel, a frail hand of a lovely and tanned young woman. "Keep your eyes on the road and your hands upon the wheel," sang Jim Morrison in unison that same year. For the record, the Doors composed music for the film, which Antonioni rejected.

If you think, having read this, the film is dated, you would be wrong. It is an authentic masterpiece you could emerge from, pumped up by insolent rebel energy.