This year at the Lumière Village restaurant, Serge Magner Catering invited chef Gregory Cuilleron to make the festivalgoers’ mouths water with his inventive cuisine. An invitation that the film-buff couldn't refuse! 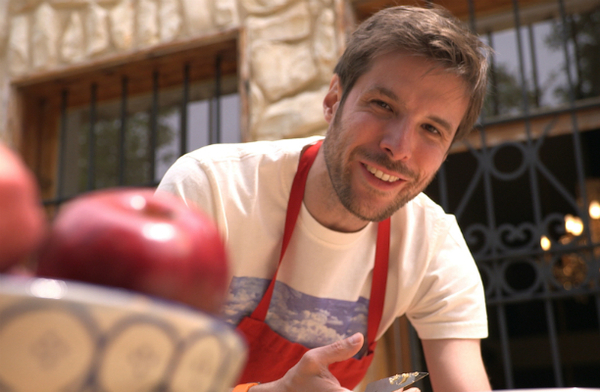 You are a chef this year for the first time at the Lumière festival. How did this collaboration come about?
In June, I was invited to join the restaurant team. The idea of composing menus for a festival is a challenge and I was immediately interested. And the Institut Lumière is housed in a beautiful villa… In the noble sense of the term, I was immediately excited about this proposal!

To this point, as a Lyonnais, what connection do you have with the Lumière festival?
I'm a movie fan, so this is an event that has always appealed to me. I have been here several times; especially attending the Miloš Forman Lumière Award ceremony in 2010, but my favorite memory of the festival remains the Michel Legrand master class in 2014. First of all, I am a big fan of this composer and also because at the end of the master class, he played "Les moulins de mon coeur." It was a magical moment!

I hope to be able to attend some screenings this year because I'm really happy that Catherine Deneuve is receiving the Lumière Award. She is such an icon, I love her!

The birthplace of cinema and capital of gastronomy, the City of Lyon is the perfect place to satisfy the appetite of foodie moviegoers. What have you concocted to tickle our taste buds?
My goal was to propose dishes that are a bit "canaille," meaning based on traditional cuisine of Lyon, not standard bistro fare. You'll have for instance veal stew with pickles, my grandfather's recipe, eggs poached in beer and dumpling sprouts. For those with a sweet tooth, we propose a tiramisu with butter biscuits and a Lyonnais cake with pink praline and poached pears.

Cinema and gastronomy have always gone hand in hand together. Being a cinema lover, what are the "culinary" films that have had an impact on you?
The first would be Babette's Feast by Gabriel Axel, a film that makes you hungry! I also loved Vatel by Roland Joffe, with a stunning performance by Gérard Depardieu in the title role. And then the unforgettable The Cabbage Soup: for years, this dish was a bit of a fantasy for me. The first time I tasted, it was almost twenty years after having seen the movie, and I loved it!