We flip through his program, we double-check our camera battery. In the Pathé Bellecour theater on Sunday afternoon, we're jumpy with impatience. In a few minutes, the film Beyond the Valley of the Dolls will be screened, but there's only one thing on the festivalgoers' minds: Will Tarantino really show up? Is he going to shout « Vive le cinéma ! » or perhaps « Vive le Festival Lumière ! » ? The suspense is unbearable… dissipated a few seconds later, with the arrival of Tarantino, or "Quentin" for those in the know. 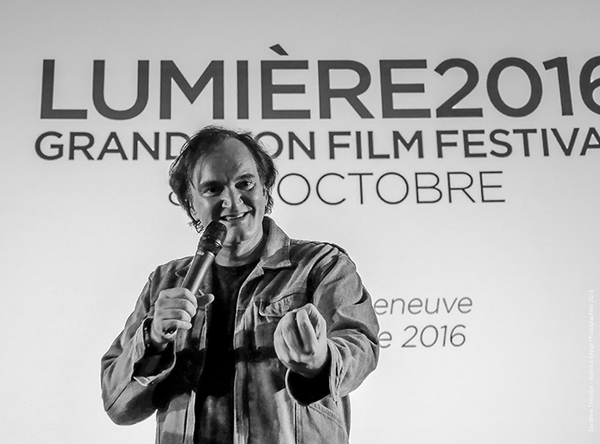 Three years after his triumph at the Lumière festival, the director of Pulp Fiction returns to declare his love for the cinema before captivated audiences. And to celebrate three years of movie passion, since his Lumière award, the filmmaker / film-buff did not come empty-handed: "Quentin" concocted a selection of films from the year 1970. From a very British mystery to a thriller served with Chabrolian sauce, from a horror flick by Argento to a saucy satire by Altman - the menu is enticing!

To whet our appetite, the filmmaker chose Beyond the Valley of the Dolls by Russ Meyer. A classic of the year 1970 for Tarantino:

The remainder of the program Quentin Tarantino : 1970